skip to main | skip to sidebar

Recently, I have discovered a site called SuperFractor.com. Rob over there does podcasts, as well as blogging, but the feature that I find really unique is his podcast interviews. On Nov 13th interviewed Gellman from SCU, which I thought was really neat. He also interviews rep's from Topps, Upperdeck, and Razor. They give him the inside scoop on a lot of their upcoming products. If you get a chance you should check out the site, it's definatley A+ quality in my book.
Posted by Sports Card Blog at 10:57 PM 37 comments: 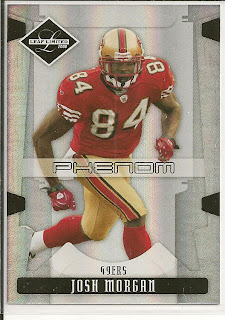 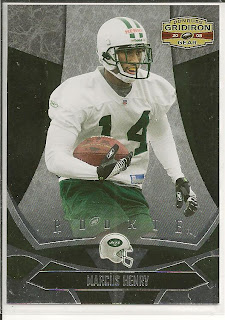 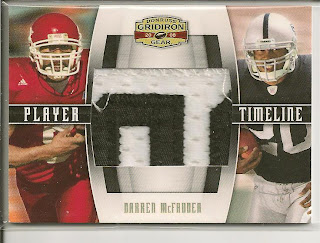 Darren McFadden Player Timeline Jumbo Patch #d 07/25!!!
In my opinion one of the best Darren McFadden patches out there!
Posted by Sports Card Blog at 8:49 PM 1 comment:

What's the real definiton of collecting?

If you have 14 or so minutes to stop and watch this video, I
reccomend it.  Chri5784 from YouTube recently posted this about his friend Blade's Drew Stanton and Calvin Johnson PC. It is a killer PC, but I want to touch base on what collecting actually is.
This video made me think, is this collecting? Obviously, "Blade" probably pulled a few of his PC items which is great, but he spent thousands and thousands of dollars on eBay to buy these cards. I never gave it much thought before, but I really don't think that this is what the hobby is all about. The hobby isn't about who has the best PC, it is the challenge/excitement of making a trade, or pulling a card out of a pack. I think this is why I admire Mario (Wax Heavan) so much. Sure he buys cards off eBay, everyone does! But, he takes the hobby for what it's worth and likes looking for his favorite player in packs and making trades. For instance, he could easily go out and buy every Jose Conseco card he wanted, and be a Jose Conseco "super collector". First off, I doubt he wants to spend all the money, but even if he had all the money I don't think he would buy all of his cards, because he realizes the whole purpose of the hobby is to collect. Not just buy all your cards on ebay.
Posted by Sports Card Blog at 8:58 PM 3 comments: 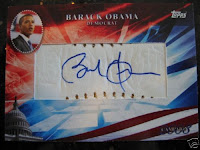 I figured since Obama is the projected 44th President, this card would be suitable. This is a Barack Obama Autograph /15 on the Sweet Spot of a Baseball! I guess you could call this a card of the day segment, but not really. I think Obama will be a great president, and will boost America's morale in this tough time. Well anyway, I got this picture from an eBay auction. The link is here.The card currently has 18 hours to go, and is at a whopping $3,050 with 22 bids. I would love to call this epic card part of my PC, but would never pay near that price. Seeing as Barack Obama (hopefully) will be around for many years to come. I know what you're probably thinking, and I really hope that doesn't happen, but if he did, the owner of this card would probably be one happy guy. He'd be sitting on a gold mine.
Posted by Sports Card Blog at 8:43 PM No comments:

I recently saw this video on "Sports Card Uncensored", Gellman believes Topps is doing this because they are out of ideas (partly true). But this looks like it will be a pretty solid product, I am very happy to see this, because I have always wanted to see an Allen and Ginter style football product. The thing that really made it for me was the buyback cards, from the original tobacco tins. I thought that was pretty cool, and will probably pick up a box or two of this when it comes out. So watch out for this hot new product, when it releases later this year.
Posted by Sports Card Blog at 7:53 PM 1 comment:

Do Card Manufacturers Hate Us?

Like I said before, I have only been collecting for around 8 months, but it's not hard to notice the card manufacuterers (Topps, UpperDeck, Donruss) neglect toward the well being of the consumer. It seems like they are more worried about making money than creating a positive impact on the card collecting community. Many decisions they make show this such as, making many useless products,  Event-Used Items, and Insane Prices.
I am first going to touch on companies making various, useless and valueless products. Let's start with Bowman Sterling. This product wouldn't be so horribly shitty if it weren't for the price. Lets go over what you get. For a $200 box of 2008 Bowman Sterling Football, you receive: 2 Rookie Autographed Relics (Which will sell for $15 each if you're lucky), 4 Rookie Autographs (3 will be no name rookies who's auto will never sell for more than $6), 12 Relic Cards (6 Event Used Rookie, and 6 Game-Worn Veteran), and 2 other random autographs. At $200 thats a shit load of hits, but if you were to sell every card you got out of the box, you would be lucky to make $120. I am not going to go over low end Topps, Upper Deck, and Score too much, because everyone knows Topps Kickoff, Upperdeck 1st Edition, and practically all Score products are useless to the hobby, offering no guaranteed hits per box. A lot of people have beef with Sage, but I am not going to give them crap for putting out hundred dollar boxes for 4 crappy designed cards per pack, horrible looking foil autos, no game used, and no resell value whatsoever. Donruss could cut back a couple of it's products (Threads or Elite could easily be taken out), but I am going to refrain from ragging on them because they have consitently decent products (besides those dreaded Event-Used).
Knock Knock! Hello? You're not fooling anyone assholes. Event-Used items have just recently sprouted up the last few years (especially in football) and I think they are killing the hobby. You might be fooling kids in thinking, "Cool JUMBO PATCH!". Not cool, what people don't understand is most "Event-Worn" items have been worn by your favorite player for 20-30 minutes, cut up into huge peices to make you think your getting more. I would rather get a dime  sized game used jersey over a jumbo event worn patch ANY DAY!
Insane Prices. I don't mean to pick on SP Rookie Threads, but I am going to have to for this segment. SP Rookie Threads are a great example of raping prices. I really dig the look of the cards this year, (and I will probably be picking myself up a box or two) but it's $230 for a couple autographs and a bunch of event worn jerseys. Theres not much more to it, because it's pretty easy to see we are getting way over charged on half the products out there, (*cough* Upper Deck *cough* Topps).
Sorry if this is a bit much to read, I just figured a rant would be an easy way to start off a blog!
Thanks for Reading.
P.S.
Don't get me wrong. Just because I rag on the products and companies, doesn't mean I am boycotting them or anything. I will still continue to work my ass off for money, to spend on overly priced sports cards. It's probably people like me who give the companies the idea that it's okay to rape your pocket through sports cards.
Posted by Sports Card Blog at 7:33 PM 1 comment: